It's that time again in the Carolinas: strawberry pickin' time!

The boys made the trip down to the Bush-N-Vine in York Co., SC, where they picked 3 gallons of the most beautiful, sweet, juicy, perfect berries you've ever seen. These are NOTHING like the store bought kind. These are the honest-to-goodness real thing. The ones from the store have no taste whatsoever in comparison with these. These will blow you away!

When I bit into the first berry it was like a little taste of heaven. These are the best ones I've tasted in a few years due to the drought. There was apparently enough rain this year to make them sweet and juicy, something the last few years' have not quite been. Though they were good, they weren't this good!

There was a mutant berry in the lot. I picked up this one and just had to laugh when I saw it.

Of course, I had to get a picture of it since it reminded me of a huge nose or maybe even a cartoon-like hippo thingy. It even stood up all by itself as if it had legs! I posed this question on Flickr: "What do you see?" Visit the picture to see the comments people made by clicking on the photo. It's interesting what everyone sees in it.

I ate my fill of strawberries, popping one right after the other. So did Kevin. He did tell me, however, that he ate so many in the field while picking that he didn't want any more for a while. I think I could eat them all day long and never get sick of them! There will be strawberry shortcake, and jam made as well. I'll make smoothies and milkshakes, have berries on cereal, berries dipped in chocolate, and berries with bananas on ice cream topped with chocolate syrup for a sundae. I'll put fresh berries in Kevin's lunch and put berries in the freezer (if there are any left!). Then we'll have to go back and get some more!

Berries like this only come once a year. Twice if you're lucky and catch them in both North Carolina and South Carolina. I'm all for getting them again when they ripen in North Carolina. But for now I'm very happy with these. As I can't squat or bend for any amount of time due to my bum knee and bad back, I am left with the pleasure of washing, capping, cutting and eating them (oh, and photographing them!). I do appreciate the effort the boys put into the harvest. They did a terrific job and got some beauties. Thanks boys!

I'll leave you with this pretty little butterfly I saw yesterday. When Kevin went out to 'skate' in the driveway, I noticed this little beauty next to the garage door. It must have been stunned or something because it didn't move when I approached it. So I ran and got the camera to get a picture. It obliged. 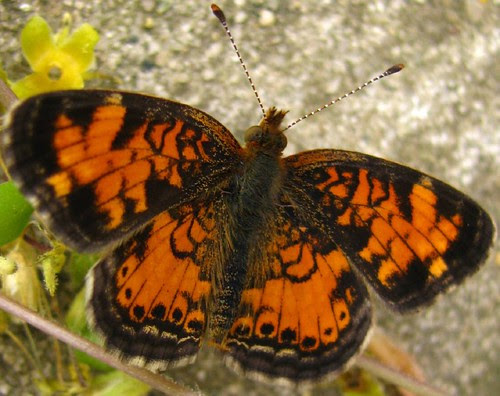 It eventually did recover and went on its merry way. It was fun getting that close to a butterfly and not having it fly off immediately. 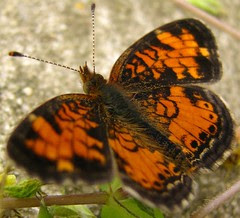 So until next time, I hope you find a pick-your-own farm near you and take home as many strawberries as you possibly can pick!

My Son (and other things)

I gave Kevin a rose this past New Year's Eve. It's long since dead, dried and quite withered, but it still remains beautiful. We will all be slightly dry and withered with age, but we're still going to remain beautiful, inside and out.

Being 46 (47 next month), this old dried out rose now means a lot to me. Not only because it's still beautiful in its present state, but because Kevin loves it so. He won't let me throw it away. He says "That's my rose you gave me, Mommy. You can't throw it away."

I guess now I understand why. :)

I've been spending a lot of time learning to use my new camera (yay!) and just living life instead of writing in my blog (sorry). I've been outside a lot watching Kevin as he learns to roller skate and ride his new scooter. He's got the skinned knees and bruises to show for both! 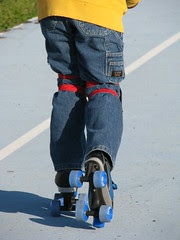 And then yesterday he wiped out on his scooter. He went down face first into the grass. I thought for sure he'd get up without any teeth, but he didn't. He skinned his chin pretty good though. I must say he's much better at scootering than he is at skating, but he's learning and having fun, and that's what counts I guess. If you look closely in the picture below, you'll see his skinned up chin.

His homework today was to write a story.
He chose to write about yesterday's scooter wipe-out.
Read it for yourself.

"I went scootering.
I was fast!
I soared.
The scooter hit a bump!
I fell!"

I love his story, don't you?

I'm very proud of him for another reason as well. When I opened up his school agenda today this is what I read:

Now how about that? You can't beat that with a stick! I'm so very proud of him and I most certainly told him so! :D

He's growing up and getting tall.
He's becoming a handsome young man.

He lost his left front tooth and now he looks so cute!!

And the right front tooth is loose too so it won't be
long until it comes out. Then he'll really look cute!

I've mainly been trying to figure out my camera during my absence. It's a Canon S5 IS. It's the one I said I wanted. I'm not sure about some things yet, but so far it's fun. It doesn't do the jewelry as well as I hoped but I'm still learning I suppose. So far, I've had an awful time getting the blues in my jewelry to photograph correctly, but I've had a good time taking pics of Kevin and other things. Indoor pics leave a bit to be desired because I'm not a fan of using the flash. When you set the ISO so the pics will shoot properly, you get an awful lot of noise in the photos. I'm bummed about that. It's still early though and the jury is still out. I have a lot to learn still. I did get some great shots at the NC Zoo. We took a trip there during Kevin's week of spring break. Here's a couple of my favorites I took while there. 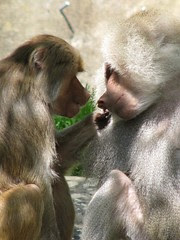 There are a ton more pictures in a set on Flickr and I invite you to go and see them. We had so much fun at the zoo. It was well worth seeing Kevin's face as he viewed the different animals. We'll have to go back.

So that's an update on what's been going on and why I've been absent. More than likely I'll be absent again, off taking pictures and trying to figure out the camera. Or spraying Bactine on Kevin's knees! I'll leave you with this video of him skating.


I hope everyone has been staying healthy and safe. 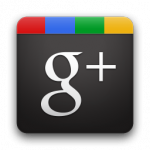